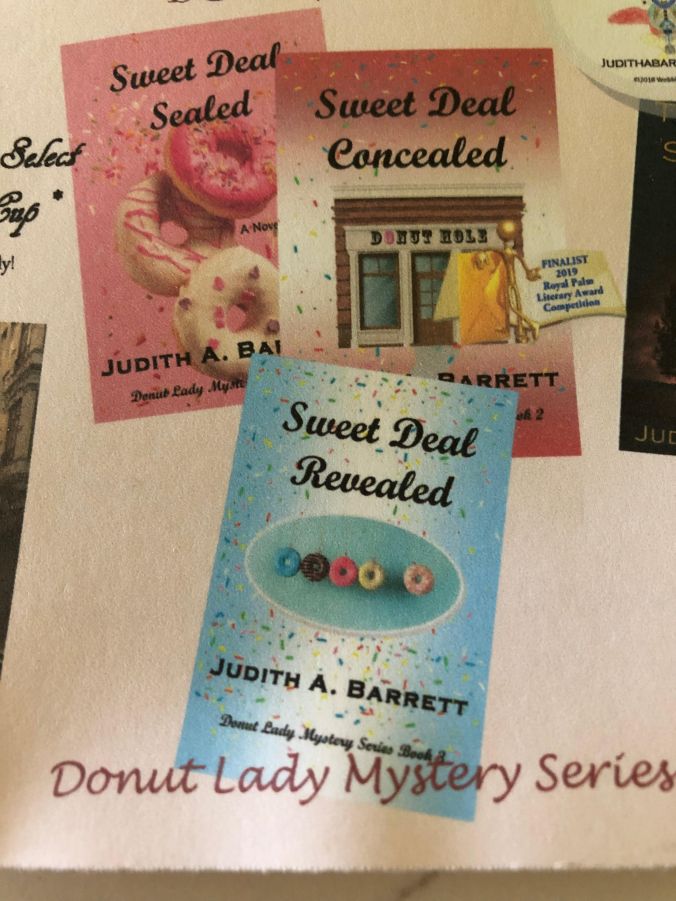 This review is for the first 3 books in this series – because just like donuts I could not read/eat just one!  I heard this author speak on a panel at the Indie Book Fest in Orlando and got an immediate fan girl crush!  She was a hoot – and when I enjoy someone that much, I know I will enjoy their books too (and I was right!).  I say these are great popcorn reads – except they are about an owner of a donut shop – you get where I am going?  Light, fun, makes you want more.

This series takes place in a small town where there are lots of great people that I would love to have as neighbors.  The main character, Karen, after being released from prison, returns to her hometown to take over a donut shop.  Thrown in are some entertaining supporting characters like her friend Shirley who can talk a mile a minute, a local boy in need of some security, a sassy second hand shop owner and an all-around good guy of a sheriff, a protector/wanna be romance interest named Jack  – oh and don’t forget Colonel and Mia (shop pets) and there is always something going on.

The first two books are very light on the mystery aspect, but that changes in the third book when murder and secrets are running wild in the town.

Word of caution – do not read this book when you are hungry.  The descriptions of the donuts alone made me go looking for some sweet treats.  The good news is that consuming all three books gives you exactly 0 calories!

Sweet Deal Sealed – The boy no one cares about disappears. Will her nightmares hinder or help her find him? When convicted felon Karen O’Brien completes her prison sentence, she is ready for a new life. She moves to her hometown in southern Georgia and buys a charming, old-fashioned donut shop, complete with the owner’s dog, cat, and secret recipes to seal the deal. The nightmares and shadows that plagued her in prison linger and add to Karen’s struggles to adapt to civilian life. Starting over isn’t the smooth process she had hoped for because not all the locals welcome her presence.  Karen is the only person in town who sees a local boy’s potential. When Woody suddenly disappears from his sketchy living conditions, Karen is frantic. Can she find the missing boy before it’s too late? Is it possible her nightmares can lead her to Woody?

Sweet Deal Concealed – Karen O’Brien—retired teacher, convicted felon, and donut shop owner. The terror of nightmares and shadows from her years in prison haunts her. After a violent man who threatened her is murdered, her nightmares foretell of a second murder. When the killer stalks the Donut Lady, will she be fierce and save herself or will she be the next to die?

Sweet Deal Revealed – KAREN O’BRIEN, DONUT LADY, has a knack for being at the wrong place at the right time. Does she get too close to revealing the truth? She witnesses a sketchy incident involving a good friend’s estranged husband. A drug deal? The man turns up dead on his wife’s porch. Was he murdered? Did the wife do it? After a second murder, DONUT LADY falls under suspicion, but is she actually the next target? Jack, her self-designated protector, can’t be everywhere. Her nightmares saved her once, but the murderer takes it to a personal level. She’s on her own.