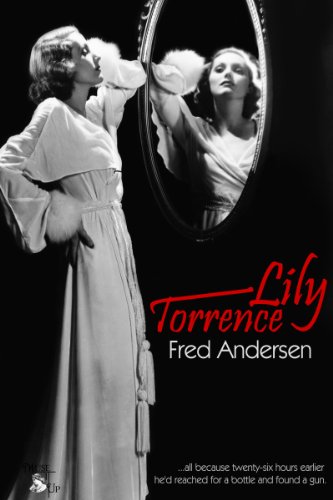 Do you remember the 25 cent pocket paperbacks of Mike Shayne?  Yeah – I’m not that old either.  However this book reminded me of these as it is a classic noir mystery or pulp mystery.  The book takes place in the long ago days of Hollywood.  There is a bombshell actress with a past and a brain as well as the every day guy who is just trying to do the right thing – in between trying to keep a job as a screenwriter and controlling his alter ego Detective he writes about.  While there is some sleeping around it is done in the days of “cut away” scenes.

The murder mentioned in the summary happens pretty late in the story but at this point I was nicely pulled into the characters and their entwined secrets.

If you enjoy jumping into this bygone era then this should be on your reading list.  The author does a stand up job of placing you into the time, the atmosphere and the story.  And with this tagline on the cover “…all because twenty-six hours earlier he’d reached for a bottle and found a gun.” – You know it’s going to get interesting!

Lyman Wilbur might write about a hard-boiled sleuth, but he is about as far from that in real life as a guy can get. When he’s offered a job at Colosseum Studios, helping to put his latest crime novel onto the silver screen, he falls deeper and deeper into a world where lies, blackmail, and murder are part of real life.

And maybe he should know better than to ask too many questions, especially when powerful people are willing to commit murder and extortion to protect their secrets, but a young girl has been killed—and it just seems to Lyman that he’s the only one willing to find out the real story.

One thought on “Lily Torrence by Fred Andersen”