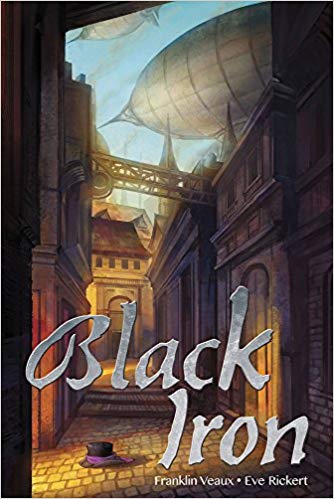 Snarky comments, underlying humor, sarcasm – if that’s your thing – this is the perfect book for you and me!   A rare 5 stars!

After reading the summary on the back, I was expecting a serious read and it is written like a great drama until you start digesting the words.  There are so many enjoyable layers to this story.  While it was set in 1855, forget anything you know about that period.  There are animates (created from body parts), flying zeppelins, twins creating all kinds of mechanical wonders and Thaddeus!  The smaller characters were just as intriguing and entertaining as the main ones.  Even some items in the story add to the plot, such as the shoes and hat!  They could have had their own book.  The humor is there in so many ways, large and small.  Slow down and enjoy the conversations (the paragraphs on protocol had me reading it aloud to anyone who happened to be near me!).

This is my new favorite book.  The co-author Veaux labeled this book perfectly when he called it a quasi-sorta-steampunk novel.

However do me a favor, do not read the summary – just read the book.  I think it will make your week – really – ok maybe not but it will sure make it better.

To find out more and get your copy go HERE!

It’s 1855, but not as we know it. The schism between the One True French Catholic Church and the heretical Italian Catholic Church has stoked three centuries of conflict, imploding the dream of European ascendancy. Thousands flee the Spanish Inquisition for havens in Germany, France, Britain and the colonies of the New World.

The face and character of London has been indelibly altered by generations of refugees. Tasked with keeping order and preserving the ecumenical vision of the Holy French Catholic Church in the face of throngs clamoring for traditional British values, the London police find themselves in an awkward position. And nobody is quite sure how to deal with the technological innovation of animates: mindless laborers crafted from the body parts of the dead.

A murderous plot with far-reaching implications casts a city torn between renaissance and tyranny as the unwitting catalyst for unspeakable global calamity. The fate of this world lies, as it often does, in the hands of a motley and disparate crew brought together by inglorious serendipity. Ironworks and iron fists will take London, and the Old World with it, to the cutting edge of a treacherous new century.

One thought on “Black Iron by Franklin Veaux & Eve Rickert”