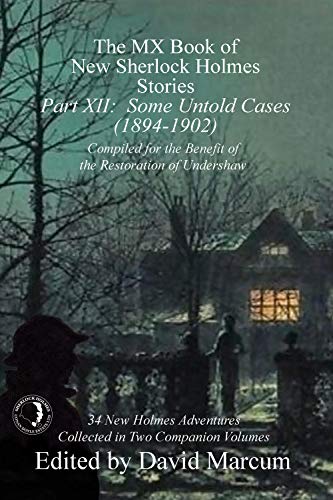 This collection holds the record for the largest collection of new Sherlock Holmes stories.  The Publisher, through these books, helps to support two organizations, The Stepping Stones School in the UK and the Happy Life Children’s Home in Kenya.

From the first story in this collection, you are submerged in Holmes as it starts with Dr. Watson kidnapped and held aboard a ship with the eventual rescue by Holmes.  The stories continue, all incredibly done in the original manner but with highlights such as The Abernetty Transactions, a script that was originally performed as a radio drama.  Also The Giant Rat of Sumatra.  “Life is infinitely stranger than anything the mind of man could invent.” Sherlock.  And even the last story The Adventure of the Exalted Victim involving a man that is a twin for the Prime Minister.

I have read a few of these collections and they never fail to entertain and fulfill that need for more Sherlock Holmes and Dr. Watson. This collection can be read intermittingly or in one sitting.

Check out more about this organization by CLICKING HERE.

34 new traditional Holmes adventures in two simultaneously published volumes. “Somewhere in the vaults of the bank of Cox and Co., at Charing Cross, there is a travel-worn and battered tin dispatch box with my name, John H. Watson, M.D., Late Indian Army, painted upon the lid. It is crammed with papers, nearly all of which are records of cases to illustrate the curious problems which Mr. Sherlock Holmes had at various times to examine…” – Dr. John H. Watson

So wrote Dr. Watson in “The Problem of Thor Bridge” – and ever since, Sherlockians have been bringing us new adventures from this legendary tin dispatch box. While his original Literary Agent only edited the pitifully few sixty stories that make up the original Canon, there have since been literally thousands of traditional adventures about the true Sherlock Holmes – and there will never be enough!

Throughout the original Holmes Canon, there were hints and teases of other intriguing cases – The Giant Rat of Sumatra… The Abernetty Tragedy… The Manor House Case. Watson mentions well over one-hundred of these, which have collectively come to be known as The Untold Cases. Now, the latest MX anthologies present thirty-four of those adventures in two simultaneously published volumes, with all royalties going to support the Stepping Stones School at Undershaw, one of Sir Arthur Conan Doyle’s former homes.

Join us as we return to Baker Street and discover more authentic adventures of Sherlock Holmes, described by the estimable Dr. Watson as “the best and wisest… whom I have ever known.”