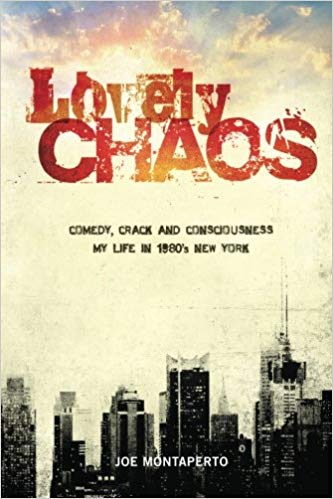 Recently I traveled back to my home state of New Jersey and for the trip, I packed this book.  It seemed appropriate as the author is a Jersey guy and (aging myself here) the book happens when I also lived in the area the book is set in.  Joe, the author, did a fine job of describing the atmosphere of New York City during that time.  I could see the sights and even smell the odors of the streets.

The author did a great job of portraying the autobiographical angst and thought process (or lack thereof) of late teens early twenty’s man as he tries to figure his life out and become an adult.  While he writes about his life lessons they are not in the typical way of do this – they are more along the line of this is what I did and this is what happened.  The twenties can be so exciting, and that feeling of being invincible so strong and the author easily gives the reader that perspective.

There were very small storylines that I would have enjoyed having closure on such as a fine for selling nuts on the street but on the whole, I enjoyed this trip back into the past and the memories it brought back for me.

For more about this author and his other works CLICK HERE

1980s New York City. A paradox onto itself. Gritty and violent – yeah – but also crackling with excitement, intrigue and – especially – possibility. For a young guy open to that kind of energy, this was a city that could be absolutely intoxicating. Nineteen year-old Joey Montaperto journeys over from his nearby downtrodden New Jersey town, seeking to escape the dreary negativity of his surroundings. Enrolling in a prestigious Russian drama school, he is determined to become the next great actor in the Stanislavski/Moscow Art Theater tradition. It doesn’t pan out exactly the way he plans, though, and after a time there, he hits the streets even more conflicted and alienated, seeking answers. He finds a gig as a nut vendor in a grimy Hell’s Kitchen location and dreams of a better life. Subsequently introduced to the ancient texts of Eastern spirituality (The Upanishads) by Vassant, an elderly, brilliant, but drunken Indian scholar who also works as a nut vendor, he becomes fascinated. When Vassant dies unexpectedly, Joey vows to continue his quest for a Master, joining an ashram in the city, while working at the connected health food store. Devoting himself entirely to the the rigors of spiritual practice for the next year, he sits in daily meditation – until one day he is rocked by a major epiphany. Oh my God! I could sit here in my white yoga pants and meditate for the next 40 years, and still not reach enlightenment! Then what?! What about travel? Adventure? Life?! Upon that realization, he dives headlong into what he believes to be his true calling – stand-up comedy, embracing the comedy circuit and the whole lifestyle that ensues. While performing, he also hits the seedy Hell’s Kitchen bars – dancing, drinking heavily and mixing with the denizens – the pimps, prostitutes, dealers and other comics who populate the bar. He learns quite a lot from these characters, but still maintains his spiritual practice. Quickly rising up the ranks of the comedy scene, he is consumed by the lure of fame, by the rush of performing. Now, he has to get onstage. He is jonesing. This is his life. Out on the streets at all hours of the night, he has to defend himself against the hordes of crackheads roaming the streets, soon even relishing the violence, the rush of revenge. He gets involved in a romantic affair with the sultry Vanessa, a Puerto Rican former streetwalker – who is also transgender – and revels in that scene. It fuels the rush, but it’s still not enough. Nothing ever is. He can’t come down. Finally, disgusted with the comedy club scene, the comedy bookers, the rough streets, and his annoyance with no matter what club he goes to, it seems Jon Stewart and Dave Attell are already regulars there, blocking his way. A chance viewing of the movie ‘My Dinner With Andre’, makes a life-changing impression on him, and he becomes spellbound by the film, the book, and it’s conversations about exotic travels, and mystical experiences at the spiritual community, Findhorn. He excitedly applies, but finds it is way too expensive, and is sadly resigned to staying in the city. He is unexpectedly reprieved when he hears about Omega Institute, a holistic community in rural upstate New York. Abandoning everything, he then jumps on an Amtrak to begin the adventure of his life.