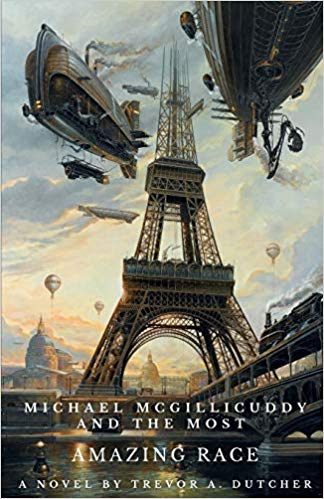 Need a book that you can curl up with and forget about the rest of the world – this may be it.  My reading for an hour on Sunday afternoon turned into several hours because I just had to know what was going to happen.  This book is filled with adventure, interesting characters, challenges, and intriguing mechanical devices.  A little like Indian Jones meets Around the World in 80 Days.

While you can read it quickly, with the layers of subplots and character complications that are running simultaneously, you should slow down and enjoy.

The main character, Michael is a young man that has led a pretty sheltered life, but when the opportunity presents itself to participate in The Order of the Blue Cloak Race he takes a leap both physically and emotionally.

Spoiler alert (sort of) – the book does have a nice conclusion, however, an Epilogue leaves a tidbit for the possibility of a second book.  This reader has her fingers crossed.

Note about the cover – the picture does not convey just how eye-catching this cover is – in person it just keeps you looking at all the incredible details!

For more about this author CLICK HERE.  He is also offering the first few chapters free on his site. You can also read it as part of Kindle Unlimited.

Puzzling Intrigue. Epic Adventure. Cut-throat competition. When a quiet introvert and gifted tinkerer, Michael McGillicuddy, is invited to participate in the annual race organized by a secret society called the Order of the Blue Cloak, he forces himself to take a chance. Participation in this year’s race represents a dual opportunity: To honor his father’s legacy, and to win a prize sufficient to pay taxes on his mother’s land to avoid foreclosure. The action-packed adventure that follows features a vibrant cast of characters, and includes some of the brightest minds and most unscrupulous characters 1895 Europe has to offer, including a Luxembourgish railroad baron, a middle-eastern mystic, a lone-wolf bounty hunter, a British female spy and a Dutch female alchemist. A devious circus ringmaster, and his equally devious crew, including a strong-man with a mechanical arm and a ruthless female enforcer with a chip on her shoulder and a penchant for poison, provide the main antagonistic forces. Follow the racers over land, sea and air, from London’s outskirts all the way to Paris, as they risk life and limb to embark on a scavenger hunt-style race with few, but important, rules. The winner of this year’s race will be the first to solve all the milestone puzzles and arrive at the finish with a complete and matching set of milestone tokens. Along the way, Michael will encounter intellectual challenges, fantastical creatures, games you’ve never heard of, physical peril, sabotage, betrayal, love, heartbreak, and even a touch of magic, all while discovering himself and a newfound taste for adventure. But as a novice among experts, and with the odds so strongly stacked against him, how will Michael survive, let alone compete?

One thought on “Michael McGillicuddy and the Most Amazing Race by Trevor A. Dutcher”