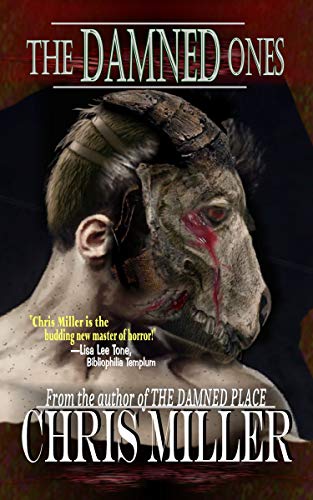 I’ve said it before, and I’ll say it again, “Chris Miller’s books scare the crap out of me.” So why do I keep reading them?  The man can weave a story!  Twenty-six years have passed since The Damned Place, and life for the characters has been mostly normal.  But you know it can’t last. This story is not only scary, but it’s also evil.  Think of the very worst – this book goes one step further.  And then the weaver (aka author) shows you something semi-normal and you breathe – but not for long.

It’s back but can the old friends go back to deal with the Glutton? I did enjoy centering the book around Jim, now a chief of police, who with all his flaws, still might have some hero lurking in his broken life.

The creatures and evil are back.  Are you brave enough to read?  Can you handle the end?  I did. But it pushed me to my limit – and tugged me over it. And I think I know why this author is so wonderfully terrifying – the creatures are intense, but the reader knows that is fiction.  However, when it comes to the people – the slight chance that they are “real” and what they are capable of – that’s the intense terror.  Add both of those together and you have this author – and me only reading him in the daylight.

The author does give a recap at the beginning to reacquaint you with the previous book so no worries if you forgot something (but how could you?!)

For more about this author and all their books, CLICK HERE.

Twenty-six years after The Damned Place, Jim Dalton is now chief of police in the formerly sleepy town of Winnsboro, where a series of brutal murders leads him to believe something insidious is lurking just beneath the surface. As he meets with his childhood friends, the scope of what they hoped was left behind in the woods all those years ago begins to come into focus, and they realize they are once more all that stands in the way of a hungry beast from outside of reality and global destruction. Ours isn’t the first world The Glutton has devoured, and if Jim and his friends can’t find the key to destroying it, it won’t be the last. THE DAMNED PLACE left its stain, and now mankind’s only hope rests within THE DAMNED ONES.