THE SPARROWS OF MONTENEGRO 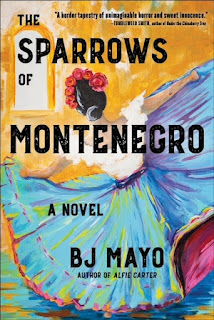 Tree “Bigfoot” Smith and Cedar Jones first meet on the day they join the US Cavalry’s Fourth Cavalry Regiment based out of the Historic Fort Concho in what is now San Angelo,
Texas, in 1870.

Their journey takes them into the heart of the dangerous Llano Estacado region known as the Comancheria. The area is ruthlessly defended by a band of Quahadi Comanche and their stoic leader, Lonely Horse. The Troop encounters a large group of Comanches and the gun-running Comancheros at Mushaway Mountain, close to Gail, Texas. A quick battle ensues that leaves eight men dead.

Post Cavalry life finds Tree Smith and Cedar Jones as cowhand and cook on the large Rolling J cattle ranch in South Texas bordering the Rio Grande River. The ranch employs two Vaqueros from the village of Montenegro in Mexico, just across the river, whom Tree befriends.

The quiet life on the Rolling J ranch is brought to an abrupt halt when a local sheriff warns that a band led by the cold-blooded, sadistic killer known as Gato Montes has been preying on the ranches along the Rio Grande. After the sheriff is nearly killed by these men, Tree is tasked with tracking them down, only this time, he is traveling alone and the dangers are greatly multiplied. His epic journey takes him back into the Llano Estacado where he is captured by Lonely Horse and taken to Mushaway Mountain where the Comanche carry out their own form of frontier justice.

Tree’s return journey puts him on the same path as Marco, a Mexican goat herder, who rides with him to the Mexican Village of Montenegro, where Tree meets Julia, who changes his life forever after he becomes involved in and bears witness to the wonderful celebration of Dia de los Muertos.

PRAISE FOR THE BOOK:

“I could not put this one down. Mayo has masterfully written a character-driven page-turner, a compelling tale for the reader who seeks something more than the stereotypical western novel.” —Ron Schwab, author of Goldsmith and the Law Wranglers series

“This mild-mannered west Texas rancher has woven a border tapestry using yarns made of unimaginable horror and sweet innocence.” —Tumbleweed Smith, author of Under the Chinaberry Tree

“A thoroughly enjoyable read—a cowboy’s trail you’ll want to follow, with a memorable cast of characters, renegades, soldiers, lawmen, and simple folks, and a hero that you’ll want more of.” —John J. Jacobson, author of All the Cowboys Ain’t Gone

I come from a long line of readers.  My grandfather’s favorite reads were all about the west and cowboys, so when I saw this book, I thought I would reminisce a little as I read it.  Well, let me tell you – This is not my Pappy’s style western!

The story starts off with a couple of intense scenes that are full of grit and violence but then flashes forward to give the reader the context.  The beginning is little difficult to read but very much needed to describe the level of heinous actions and understand the catalyst at the center of this plot.  Many of the characters are rough as the time period demands.  As the story progressed, I started to see another side.  The main character – aptly named Tree – is a large man with a heart to match.  He has led a harsh life that puts him in the direction of joining the cavalry where he meets Cedar.  Ok, with two names like those, you just know they will end up being friends.  While I could go into a whole thing about their names and the fact that they have virtual bark on the outside that is rough – but inside – well you get where I am going with this.  The names fit.

Every good cowboy story needs a bad guy; in this case the Gato is beyond bad and very much evil.  He gathers a gang of like minded and hideous men who carry out terror throughout the border towns.  Just in case that is not enough, there are also Comanches with no love in their hearts for any other man, woman or child.

The minor characters are just as important and round out the story bringing life to the town, villages and ranch.  Between the Sheriff, townie Mr. Whittmire and various cowboys, the depth of the story and main characters evolve.  Felicity and Julia especially give the reader a chance to glimpse into the hearts of Tree and Cedar and the ability to see a happily ever after.

While I am not so sure my Pappy would have enjoyed this tale – not enough cowboys and cattle – I certainly was entertained from the first page to the last.

One thought on “The Sparrows of Montenegro – LSBBT”