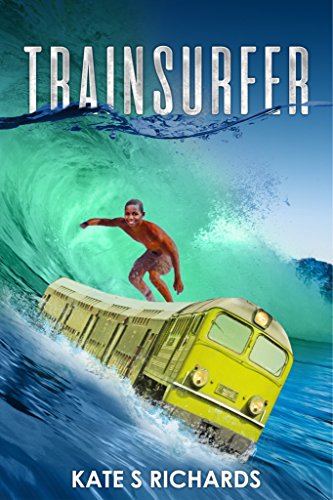 This author has not only created a wonderful story she has also filled a void in children’s literature.  Talking about tough subjects with the younger people in our population is a daily struggle for parents, librarians and teachers.  This book not only helps fill that gap but also gives the reader a poignant story.

This book deals with apartheid and its effect on children and teens.  The main character, Jabu’s life while tragic, is shown in a way that kids can relate to.  When characters of two different worlds are brought together through surfing, this common bond enables them to see into the lives of their fellow surfers.  Sometimes deep thought can be started on a beach with a simple sign that says Whites Only.

This is definitely a book to add to any library or middle grade reading list.

For another great review, check out the blog JuliaPicks1.

A salty, gritty, exciting, heartbreaking and hopeful page-turner that leaves readers wishing for a sequel…

The day his mother dies, Jabu’s instinct is to run. He runs away from the Johannesburg hospital and soon finds himself amongst a gang of train surfers on top of a hurtling train. After witnessing the dark side of train surfing, he continues to flee from his hopeless life, all the while searching for a place to call home. He stows away with an unexpected creature companion as he travels from Soweto to Durban, hoping to find his aunt. Through a series of fortuitous events, Jabu makes interracial friendships (in a time when that was unusual), learns to surf the waves and connects deeply with the street children called Father’s boys.

Being an orphan in apartheid South Africa in the 1980s is perilous. The police are a constant threat and an ominous presence throughout. It takes courage, loyalty and friendship to overcome the societal dangers.

On the other side of apartheid society is Billie, a gutsy tomboy. It’s not that she wants to be a boy, but she yearns to be with the boys in the surf, living daringly. One surfer, in particular, has her attention, but their lives are all about to change as they become a part of a bigger South African story that goes beyond surfing, 80’s music and escapism.

Originally conceptualised as a screenplay, Trainsurfer is bursting with cinematic-style action.

Threaded through with Christian motifs, the story is one of injustice, betrayal, forgiveness, self-sacrifice and ultimately, hope.

One thought on “Trainsurfer by Kate S. Richards”