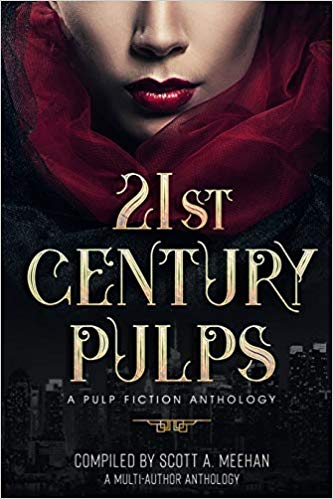 In all honesty, I edited this collection.  Not just that but I kind of begged for the job.  I met Scott at the Indie Book Fest in Orlando last summer.  He told me about his plan to try and make a Pulp anthology, gathering a wide variety of authors.  I spoke with Indies United Publishing House about the idea and well the rest is history!

Several authors involved, who hold a special place in my world, contributed to this – Ralph Rotten, Aaron Gallagher, Lisa Orban and new to the Indie scene, Lisa Reifsnider.

This collection is diverse and poignant. Scott has gathered authors from several corners of the globe and a wide variety of experience. Grab your copy and enter some new worlds.  See exactly what the 21st Century has to offer.

Pulp Fiction (not the movie) originated during the first half of the 20th century because the magazines were printed on cheap “pulp” paper. Featuring diverting fiction for the general entertainment of large audiences, the pulp fiction era provided an environment for creative talent that influenced all forms of entertainment for decades to come. The 21st Century Pulps features a different class of creative writing with short stories and poetry submitted by Indie Authors of the 21st Century. Just as many authors got their start in the pulp magazines before becoming great writers, such as Ray Bradbury, for example, there are multitudes of current Indie authors, less well-known today, that have another chance to form popular fiction.New details have emerged from today’s social, technological, and historical developments that make the stories found in 21st Century Pulps the new era reading entertainment with stories that continue to offer action-packed adventure, lively or thought-provoking heroes and heroines that promotes lead female characters and multi-cultural stories of global diversity in today’s world. Enjoy your exploration into this vast world of 21st Century Pulps fiction!