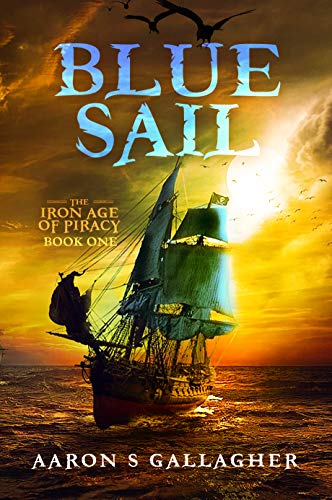 One of this author’s most prominent talents is the development of his characters.  They are fully formed people in every aspect and that is reflected his books.  This time he outdid himself.  The main character, Piter has a many faceted personality and his second, Gwendolyn – well, let’s just say I know who she is thanks to the way she was written.  This is an adventure story but it is also the story of two people finding their true selves.

Once again I was taken away by this author.  I was riding right along with that motley crew.  I smelled the smoke from the canons, felt the waves of the ocean and the pain experienced by the characters.

Full Disclosure:  I have known and worked with this author for almost 4 years.  I have the honor of being his editor.   He is one of my favorite authors and people.  That said, he would be the first one to tell you that I do not pull my punches and that I am a very straight shooter when it comes to my opinion.  This author has spent the last few years honing his craft and this steampunk book demonstrates his abilities.

On a last note – Aaron and I agrued? Discussed loudly? Rude jokes were made about New Jersey and New York (our home states) but the author is always right – over the title.  After you read it, don’t pull your punches – please tell what us what you think.

For more about this author and all his wonderful books, CLICK HERE.

In the crystal waters of the Caribbean sea, a predator stalks unwary merchant ships.

The notorious pirate Piter Vierling freely plunders these and other vessels. Possessed of the ability to hide in plain sight, Vierling and his crew are challenged on the open sea. In Port Royal, Jamaica, a British captain is entreated to stop him. Armed with a new type of warship, Captain Iago Haken undertakes to stop Vierling once and for all.

As the confrontation draws closer, each of them will be changed in ways they could never suspect.

And so will their world.

The Golden Age of Piracy is over.

The Iron Age of Piracy has only just begun.